Zooming Toward a New Bus Network 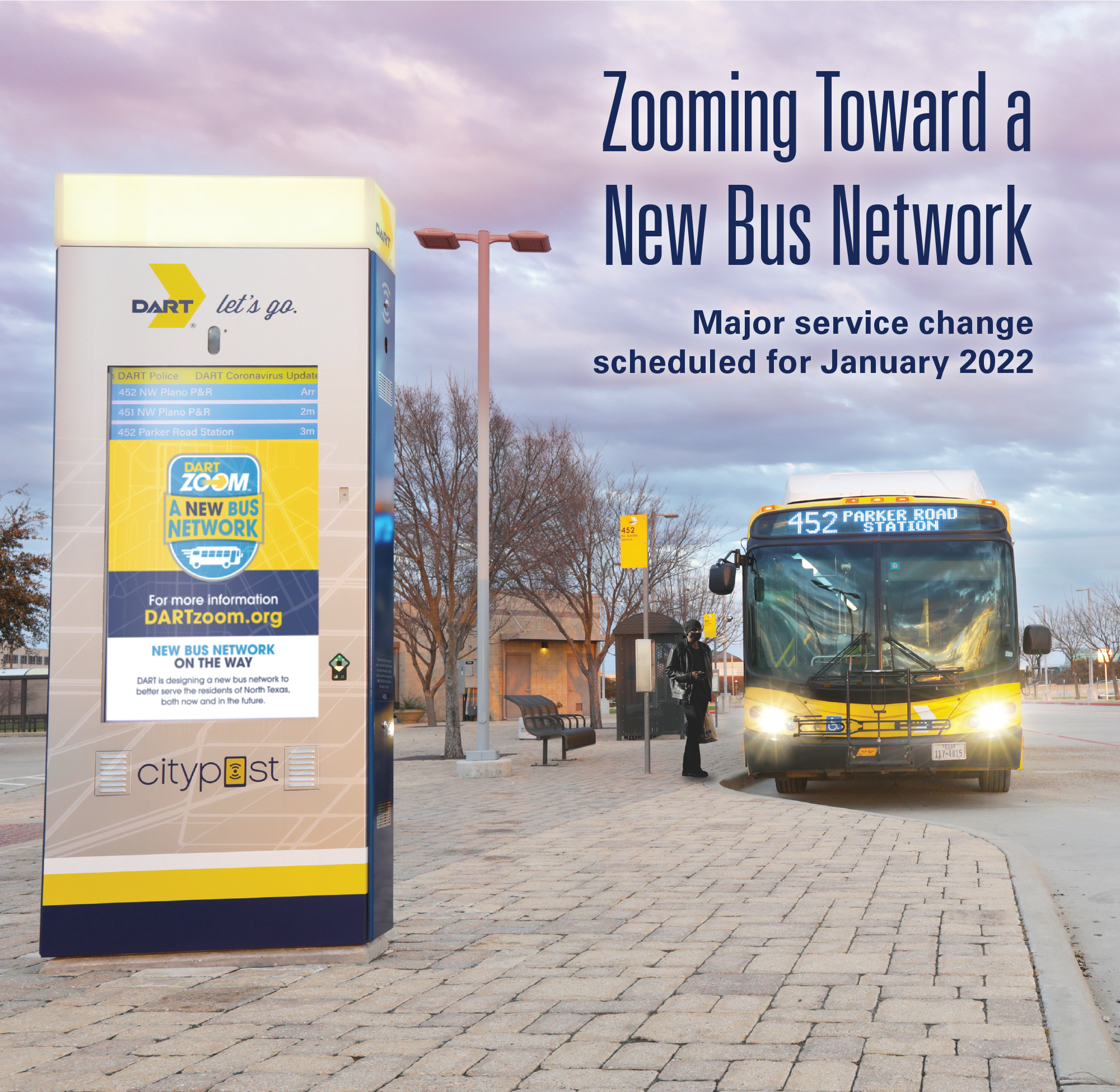 This article is from the Spring 2021 issue of the Inmotion stakeholder newsletter. Subscribe here for email notifications when a new issue of Inmotion publishes online. Find the latest issues of Inmotion at DART.org/publications. 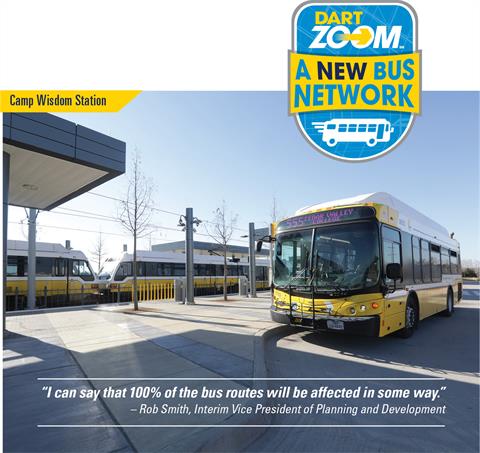 In just eight months, DART expects to implement the work of the DARTzoom: A New Bus Network project. Unlike past bus planning that adjusted routes to serve new rail lines or developments, this new five-year bus service plan is a complete redesign of the bus network. Combined with restored light rail frequency, these changes will improve service and impact approximately 90% of our riders.

The DART Board of Directors reached a key decision in November 2020 when it unanimously adopted a board policy governing the balance of ridership and coverage.

The policy directed the project team to develop a draft final bus network with 70%-75% of the service focused on high-ridership corridors. The remaining 25%-30% of resources is allocated for services that maximize coverage. This hybrid approach will include both fixed bus routes and greatly expanded GoLink service.

DART's long-term goal is to develop a transit system that can grow ridership over time by making the bus network more useful and reliable, while maintaining coverage for those who need access to public transit because they have no other means of transportation available.

"This mix allows DART to meet its social responsibility while also trying to increase use of the system," said Rob Smith, Interim Vice President of Planning and Development.

The agency's goal is to restore service to 100% of pre-pandemic levels on both bus and rail during the January 2022 service change. Service levels - which are defined by the number of operating hours, vehicle miles traveled, and costs associated in providing those services - will be determined by the funding allocated in DART's 20-Year Financial Plan and associated operating budgets.

Staff also are creating a second version of the bus service plan that includes even greater frequency and broader coverage options. If additional resources become available within the plan's five-year lifespan, the agency will add service.

According to Smith, most of DART's regular, local, fixed-route bus service will be noticeably different.

"I can say that 100% of the bus routes will be affected in some way," Smith said.

With the planned changes, more than 74% of service-area residents will live within a half-mile of service, versus 68% for the current system.

Express bus routes and site-specific shuttles - like the partnerships with area universities and employers - will have only minor adjustments.

Currently, a lot of short feeder routes take people to a rail station or bus transit center. In the new bus network, DART will combine many of these short routes into longer ones with more crosstown functionality, while still getting riders to transit hubs.

The key characteristic of the new plan is improved frequency on more bus routes. DART has proposed increasing the number of high-frequency routes - which have 15-minute peak and 20-minute midday frequencies like light rail - from seven to 22. A larger percentage of routes will have 30-minute or 40-minute headways.

Increased frequency is key to ridership-focused bus service because it reduces wait times, thus speeding up trips, especially when transfers are involved. Roughly half of DART's customers transfer at least once to complete their journey. Frequency also increases job access because it expands the job opportunities that a person might reach in a reasonable amount of time while traveling by DART.

The key characteristic of the new bus service plan is improved frequency on more bus routes, which reduces wait times and speeds up trips, especially when transfers are involved.

Planning staff, assisted by transit planning consultants from Jarrett Walker + Associates, presented the draft bus service plan to the DART Board in March. The public input phase is underway with a mix of socially distanced tactics to gather input from riders.

DART has placed information on buses and trains, and utilized social and digital media, advertising and news coverage to distribute information. A series of virtual community meetings will culminate in a public hearing in June.

Based on the comments and feedback received, staff will update the bus service plan as needed. The DART Board is scheduled to review and approve the final plan in August.

The agency will need the following four months to complete the implementation activities required to convert the plan into reality by January and educate riders on the new service plan.