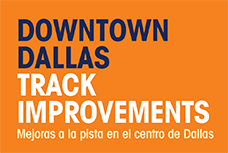 The weekend construction will continue into September and normal weekend service is scheduled to resume in time for the start of the State Fair of Texas.

The closures will allow DART to replace track along Pacific Avenue and Bryan Street, repair and add additional rail crossovers, and repair city streets and drainage. The track improvements will create a smoother ride through downtown, eliminate ongoing maintenance issues and increase the number of areas where trains can switch tracks, which will reduce service disruptions.

Six separate DART shuttle bus routes will operate during the weekend closures to serve the affected downtown stations. Buses will load and unload at the red "Rail Disruption" bus stop located near each station. Signs on the rail platform will point customers to these bus stops.

Service and project updates will be available at DART.org/plus.