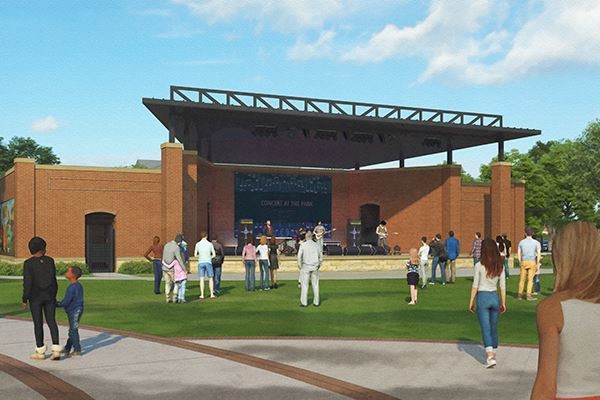 Irving Heritage Park rendering
Posted on May 29, 2020 by City of Irving

Located a few blocks from the TRE’s Downtown Irving/Heritage Crossing Station, Heritage Park is the main gathering space in the Irving Heritage District, which is the city’s downtown area.

Redevelopment of Heritage Park begins May 26. Construction on the $6.5 million project is estimated to be completed in the fall of 2021, weather permitting.

The project will relocate and renovate the existing train depot, original city library, water tower and caboose rail car, as well as adding lighting and walking paths. The completed Heritage Park also will provide a new entertainment stage building and gazebo. The entertainment facility will include a permanent sound system with stage lighting and a large video screen for movie showings and performance visual graphics.

Soon, contractors will block off the perimeter of Heritage Park from public access. The city will redevelop the area, including moving some of the current fixtures and buildings to other sections of the park, as well as adding lighting, walking paths and a performance stage building. Construction on the $6.5 million project is estimated to run through summer 2021.

The city’s Parks and Recreation Department and Capital Improvement Program began collaborating on the redevelopment project in 2016. The city met with interested residents on three separate occasions, gaining valuable input while discussing the ongoing project design. In February – after several years of design and consulting work – construction on the project was awarded. Plans for the redevelopment will include the valuable perspective and input the city gained from Irving residents.

One of the most significant changes to the park is the inclusion of a performance stage at the corner of Third and Hastings streets. The stage building’s architecture will reflect early 20th century warehouse buildings, like those once seen along railroad corridors. The new stage will include a large LED video screen and a green room for performers, as well as stage lighting and sound for events and performances. Family-style restrooms will be added for public access to the right of the stage building.

The city’s first library building, which is currently located within the park, will rotate 90 degrees and will be moved to the corner of Third and Main streets. The city plans to restore the structure with a new roof, accessible restrooms, storage and a kitchenette, and new exterior features, such as a deck and outdoor string lights. The updated library building will continue to serve as a venue that the public can reserve for private events.

Food truck parking spaces will line Third Street. Visitors will have a seating grove, between the library and performance stage building, to enjoy street fare, as well as any outdoor entertainment that may be scheduled. The city hopes to regularly draw in food vendors and visitors to the area after its completed.

As part of the project, ONCOR crews will place existing utility lines underground, including the lines that currently bisect the park. Second, Hastings and Third streets will be power line-free once the renovation is complete. The change will help showcase the natural beauty and historical preservation of the area.

Additional park bench seating and lighting fixtures, like those found at the Main Street Plaza, will be added to the park. The lighting will help increase visibility and safety throughout the park.

Once construction is complete, the city hopes the park will serve as a gathering destination for citywide events, as well as a captivating locale for visitors in the Heritage District and downtown Irving.

Heritage Park currently consists of two lots. One is an empty field that was the site of a U.S. post office, and the other is a small park dotted with historical landmarks. Once construction is underway, crews will update the park to create a more immersive gathering space for residents and visitors to enjoy.

The cabin will stay in its current location, near the corner of Second and Main streets. The home was originally crafted as a dogtrot cabin — a single roof home with two separate structures and a breezeway in between. One of the structures was destroyed in a fire prior to the city’s ownership of the cabin in the mid-1980s. Crews will build a marked foundation where the destroyed room would have stood, so that residents can gain an understanding of the scope of the original building.

The crown jewel of the park, Pioneer Walk, is a circular pathway that will encompass eight plaques describing the city’s founding communities. While residents and visitors can find historical landmarks scattered throughout the city, Pioneer Walk will provide a venue to experience all of Irving’s rich history in one location, as well as images of the people and places it honors.

The train depot, which sits in the center of the park, will be restored and relocated to the west side of the park facing Hastings Street, adjacent to the antique caboose. Crews will relocate the railroad semaphore to a more visible section of the park, near Second and Hastings streets, and install railroad tracks for the caboose.

The city also will relocate the windmill and water tower to more prominent and visible locations throughout the park. The historic water tower will be displayed only a few hundred feet from its original location in the intersection of Second and Main streets. Most of the trees are already established in the park; however, the city anticipates adding additional large trees, as well as native ornamental landscaping.

The redeveloped Heritage Park will highlight Irving’s historical features, including:

Learn more about the project on the city of Irving’s website.
Categories : Community
Leave a comment
Newest on top Oldest on top
Load more comments
Thank you for the comment! Your comment must be approved first