New Year, New Reminder What’s Up with the D2 Subway 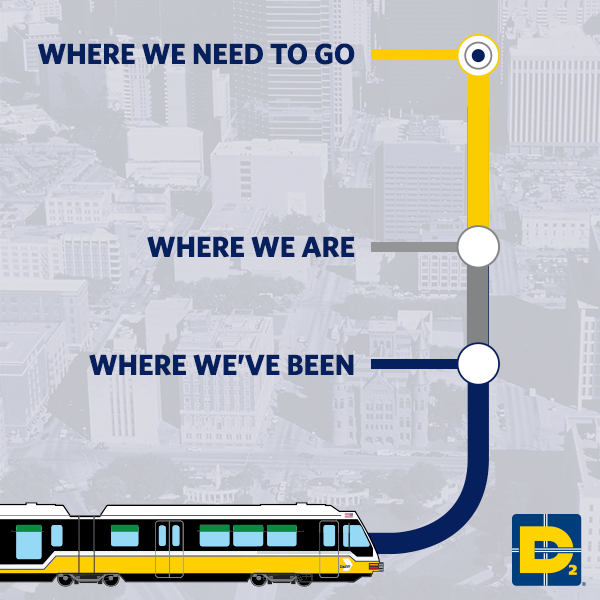 ART has a lot on its plate as we kick-off 2018. But don’t worry, we remain as committed as ever to transit projects we discussed last year, like the D2 Subway.

As DART works through the funding process for the D2 Subway, we wanted to provide another update on the important role the new line will play for North Texans and where the project currently stands.

Why D2 and Why a Subway?

Once completed, the D2 Subway’s new, mostly underground route will help North Texans move more freely and easily around the region than ever before.

A Subway North Texans Can Get Behind

One of the main drivers keeping the D2 Subway project “on track” has been collaboration. DART has worked side-by-side with the public, stakeholders, local residents, and businesses to ensure the D2 Subway provides the most benefits possible for North Texas.

There are bound to be differences of opinion on everything from routes to transit types, but the input we’ve received from riders and non-riders - for example, determining the best possible route through downtown Dallas - has helped us refine the project to one that best balances the region’s needs and resources. As the process continues to move forward, we will continue to rely on the feedback and input from the public.

DART received the City Council’s approval of the Locally Preferred Alternative (LPA) in September 2017.  Shortly thereafter, the DART Board approved the LPA as well.  Both actions recommend using the Commerce Street alignment. The FTA currently reviewing the LPA so the project can continue to advance through the agency’s Core Capacity program and be eligible for up to a 50 percent grant to help cover the project costs.  While that review is underway, DART is gearing up to reinitiate the engineering and environmental clearance for the new LPA this Spring.

As Congress continues to work through budget negotiations, however, transit projects like the D2 Subway could face further obstacles and challenges - especially if funding for the Core Capacity program is eliminated as the President’s budget recommended. The DART Financial Plan includes a scenario where the full grant is not received to ensure that the project can still become a reality.

DART will continue to work through the appropriate channels to secure funding for this much-needed project with input from surrounding communities. We’re dedicated to keeping you up to speed when it comes to developments on the D2 Subway!