See How Your Bus Route May Change Aug. 12 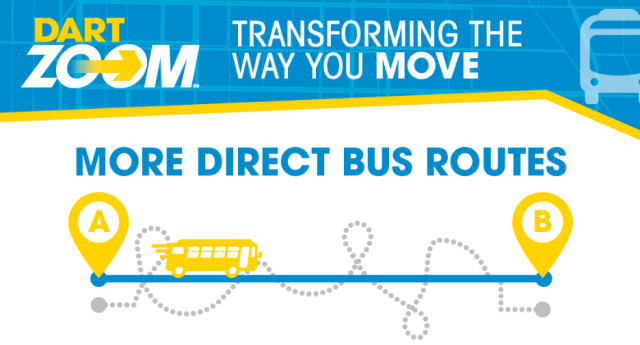 Major bus service changes are coming Monday, Aug. 12. The route modifications are designed to give you better connections, more direct bus routes and improved on-time service. Read on to see how your route may change.

A New Kind of Bus Service
Bus routes 404, 409, 466, 467 and 583 will be the first of a new kind of bus route at DART. Following recently adopted service standards, the routes will have the same service frequency as DART Rail. That means 15-minute service during peak times, 20 minutes midday, 20-30 minutes other times, and expanded service hours – from about 4 a.m. to 1 a.m.

Additionally, a new Parkland shuttle, Route 706, will connect remote UT Southwestern Medical Center employees with other medical district facilities as well as the train system. It will operate weekdays, every 20 minutes, 7 a.m. to 6 p.m.

More Efficient Express Routes
Following extensive customer feedback, DART will implement several changes on Express routes that run through downtown Dallas. The routes will be more efficient, since they will no longer have the downtown “loops” that have hindered schedule reliability. Express service also will be extended into new employment areas such as Uptown and Cedars. The routes affected are 205, 206, 208, 210, 278 and 283. Expect slight schedule adjustments, as well.

Look for new timetables and schedules online and learn more about these changes at DART.org/zoom or transporteDART.org, or by calling DART Customer Service at 214.979.1111.