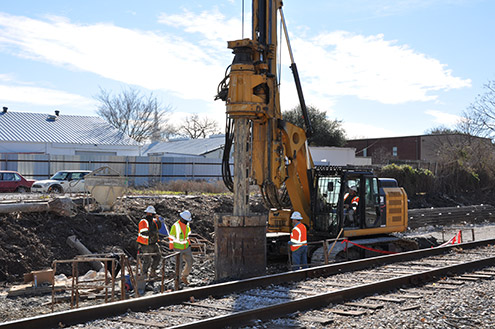 Silver Line Construction
Posted on Dec 30, 2021 by DART News Release
As 2021 comes to an end, Dallas Area Rapid Transit (DART) looks back on the accomplishments of last year.

January: DART Asks North Texas Young Artists to Share Their Heroes
The annual DART Student Art Contest started the year by asking all North Texas students to share their heroes through art. The theme of this year's contest was "Everyday Heroes Ride DART." Heroes come in many forms and this year's art contest gave young artists the chance to salute the hometown heroes that have kept our community going during the pandemic - everyday people that have made a positive impact in the lives of others.

The Silver Line Regional Rail Project's primary purpose is to provide passenger rail connections and service that will improve mobility, accessibility and system linkages to major employment, population and activity centers in the northern part of the DART Service Area.

High resolution JPG (opens in a new window)
March: DART Applauds Jonathan's Place for Service During National Safe Place Week
The Safe Place program, operated locally by Jonathan's Place, partners with businesses and community organizations to provide immediate safety and support for local youth. DART began the collaboration with Safe Place in 2015 as part of its ongoing effort to address human trafficking. Local Safe Place locations include all DART trains and buses and Dallas County QuikTrips. As youth enter a designated Safe Place and ask for help, trained staff members connect them to the appropriate youth shelter for assistance.

The national Safe Place program consists of a network of more than 22,000 partnering businesses and community locations, such as fast-food restaurants, convenience stores, fire stations, public buses and libraries, which display the Safe Place sign in their windows.

April: DART Celebrates Opening of Hidden Ridge Station in Irving
On April 9, DART celebrated the opening of the Hidden Ridge Station at Carpenter Ranch in Irving, the 65th station in the DART network. Developed in partnership with the City of Irving and Verizon Communications, the new station is located on the Orange Line between North Lake College and Irving Convention Center stations.

Over the last 25 years, the DART light rail system has grown into a 93-mile, 65 station network - the longest light rail system in the country - improving the quality of life for all North Texas residents, and providing access to greater mobility options to jobs, health care and even educational opportunities.

July: DART Honors Police Officers at 5th Anniversary Memorial Service
On July 7, the DART Police department held a memorial service honoring the sacrifice of the police officers from both the Dallas and DART police departments following a protest march in Dallas on July 7, 2016.

DART Police Officer Thompson, 43, became the first DART police officer killed in the line of duty when he gave his life, saving the lives of countless civilians and fellow officers.

August: The DART Discount GoPass Tap Card Supports Riders in Need
DART launched the Discount GoPass® Tap Card pilot to ensure riders who qualify have access to jobs, health care and educational opportunities, reducing social and economic inequalities by making mobility financially feasible to more people. The program provides riders using any one of nine support assistance programs with a 50% discount on the regular price of a DART pass.

As the North Texas region continues to experience unparalleled growth, becoming a national and international destination for both residents and corporations, DART has undertaken a complete blank-slate redesign of the existing bus system. Working with all 13 Service Area cities, employers, community leaders, and transit riders, DART has developed a new bus system that is designed to ensure passengers have safe and easy access to employment, education and entertainment areas across the DART service area.

"We are honored to once again be named as a Best-in-State Employer by Forbes," said Nadine Lee, President & Chief Executive Officer. "DART is an incredible place to work and develop your career because of the fantastic people who have chosen to be part of the DART family. Our employees' dedication to DART's mission and values and determination to put our customers at the heart of everything we do, is the key to our success."

November: DART Launches Three-Year On-Demand Service for Joppa Community Residents
DART launched the Joppa Rides program, an on-demand transportation service for the neighborhood of Joppa for the next three years. Funded by the City of Dallas to mitigate the impact of closing the current Linfield Road at-grade crossing, the program will serve residents of the Joppa neighborhood, located six miles southeast of Downtown Dallas.

To honor the life and legacy of the late Rosa Parks, whose efforts sparked a national civil rights movement for racial equality, DART reserved a seat at the front of every DART bus this week to commemorate her historic and unwavering efforts in support of equality for all.

On December 1, 1955, Rosa Parks was arrested in Montgomery, Alabama when she refused to give up her bus seat to make room for a white passenger. Her act of defiance in the face of an unjust law led to the Montgomery bus boycott, which lasted several months and led to both the desegregation of public transportation in our country and the beginning of the modern civil rights movement.

Rosa Parks' lifelong dedication to civil rights played a pivotal role in raising both national and international awareness of the unjust plight of African Americans and the civil rights struggle.
Categories : DART Daily Inmotion
Leave a comment
Newest on top Oldest on top
Load more comments
Thank you for the comment! Your comment must be approved first