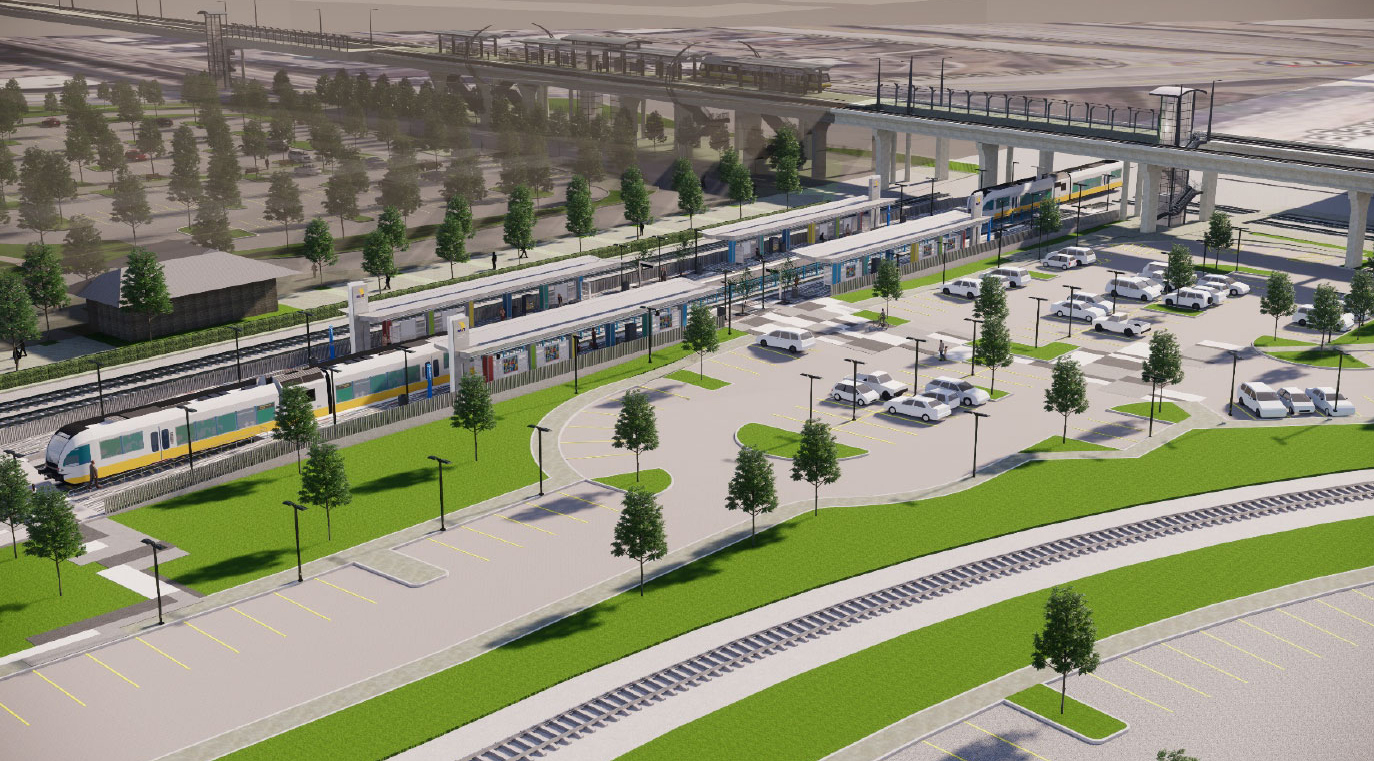 Carrollton City Council approved an ordinance to allow the expansion of Downtown Carrollton Station for the purpose of adding a separate station to accommodate DART’s Silver Line Regional Rail. The public hearing was held during the meeting on Tuesday, July 13, and the vote was unanimous.

The ordinance amends Special Use Permit (SUP) 350a, which City Council originally approved in November 2017 for the construction of the Downtown Carrollton light rail station for DART’s Green Line. The amendment expands the boundary by 7.7 acres on the City’s Official Zoning Map, and allows for a second passenger rail station on the property.

The Silver Line station will be built at ground level in line with the existing tracks of the Historic Cotton Belt Regional Rail and provide 329 surface parking spaces. Passengers will be able to connect between the elevated Green Line and the ground-level Silver Line via stairs and elevators.

The primary purpose of the Silver Line Regional Rail Project is to provide passenger rail connections and service that will improve mobility, accessibility and system linkages to major employment, population, and activity centers in the northern part of the DART Service Area. The 26-mile Silver Line will extend along the historic Cotton Belt Regional Rail Corridor between Dallas Fort Worth (DFW) International Airport Terminal B and Shiloh Road in Plano. The alignment traverses through three counties in Texas: Tarrant, Dallas, and Collin; and seven cities: Grapevine, Coppell, Dallas, Carrollton, Addison, Richardson, and Plano.

Downtown Carrollton Station (1013 N. Denton Drive) will be a major connecting hub for the Silver Line, providing a valuable connection to DART’s Green Line and DART buses, serving as a potential regional rail transfer hub for the DCTA, and tying into the city’s plans for future transit-oriented developments, including an additional connection to a future leg of the Burlington Northern Santa Fe (BNSF) Railway between Irving and Frisco.

The City of Carrollton also wants to ensure that the Grapevine Vintage Railroad (GVRR) will be able to connect in Carrollton when plans are put in place for an extension. The GVRR currently uses the 21-mile Cotton Belt Corridor tracks between Grapevine and the Fort Worth Stockyards, and shares the tracks with TEXRail, freight trains, Amtrak, and the soon to be Silver Line.

Representatives from DART presented a concept for the future integration of a station for Grapevine’s train into the layout of the downtown Silver Line station. Despite differences in equipment, boarding heights, train lengths, and the necessity to reposition the engine from one end of the train to the other for the return trip, DART’s plan illustrated enough room for a double track to accommodate the vintage railroad. The addition of Grapevine’s excursion and special event railroad will enable passengers to travel from Carrollton to the Fort Worth Stockyards and back.

DART anticipates more than 1,850 daily passengers will be using the location by 2024, with an estimated travel time of 24 minutes to DFW Terminal B, and 33 minutes from Carrollton to Plano. The landscape plan provides enhanced streetscape features including pavers, street trees, street lighting, and wide sidewalks. Pedestrian connections will enable easy access to Carrollton’s Historic Downtown, the Green Belt, and a new Silver Line hike-and-bike trail.