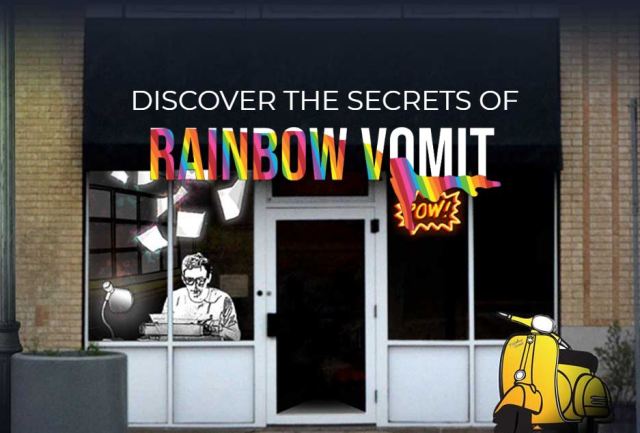 You have no excuse to be bored his weekend, as there’s tons of stuff going on. Options range from a kid-friendly film festival to a new kind of vomit. Nope, not a typo – read on, and remember, taking DART means never having to complain about parking.

Rainbow Vomit opens tonight, so you can be sure it’ll be, uh, fresh. What is Rainbow Vomit? It’s a technicolor, interactive art experience that immerses you in art, light, and sound. A 2,600-square-foot space in Exposition Park becomes another world, where it would seem a stack of comic books has “vomited” vibrant colors everywhere. There are also superheroes, unicorns, and other striking visuals. Unique photo opportunities will help you liven up your social media accounts (not that your dinner last night didn’t look awesome). The show runs through Feb. 17 at 3609 Parry Ave. It’s practically across the street from Fair Park Station on the Green Line.

’til Midnight at the Nasher brings you free live music and a film with the price of admission – which is zero, because the museum is free from 6 p.m. on. Tonight’s musical headliners are Kirk Thurmond and the Millennials, and the film is Clue. And, of course, you get to enjoy the Nasher Sculpture Center’s ’s amazing collection of art. There will also be museum tours and other optional activities, plus the museum’s café will stay open until – or ’til – 10 p.m.

Late Nights at the Dallas Museum of Art throws its own artsy shindig right across Olive Street. You can expect some pretty cool performances, film screenings and tours from the DMA, and it’s free. Tonight is the event’s “Sweet Sixteen” Anniversary, and the museum will revisit some of Late Night’s greatest hits. The event happens from 6-11 p.m: Both museums are about an 8-minute walk from St. Paul Station on all four DART Rail lines.

The 35th Annual KidFilm Family Festival happens Friday and Saturday at the Angelika Film Center – go up the escalator and look to your right at Mockingbird Station (Red, Blue, Orange lines). Presented by the USA Film Festival, the free series gives audiences of all ages an opportunity to see and discuss great films. This year, the festival salutes Marc Brown, author, illustrator and creator of the classic Arthur books and television series.

Plano Metropolitan Ballet gives its last performance of The Little Mermaid tonight. The show is a retelling of the childhood favorite through dance. Performances are at the Courtyard Theater, right across Haggard Park from the Red Line’s Downtown Plano Station.

Slavery at Jefferson's Monticello: Paradox of Liberty closes after today! If you haven’t seen it, get to the African American Museum – it’s kind of a big deal, with more than 300 artifacts, works of art and documents unearthed at Jefferson's famous plantation. The African American Museum is the first to host this newly updated touring exhibition. The museum is in Fair Park; take the Green Line to Fair Park Station to get there. Two very different theatrical performances close after today’s Sunday matinee.

Clowning Around with Murder takes place in 1935 at the Fripson Clown College. Someone has murdered the school's founder and Harry Hunsacker, world famous detective and aspiring actor, must solve the case. The show employs Pegasus Theatre's trademarked Living Black & White™ technique. Everything is in black, white, and shades of gray to mimic the look of an old movie. Performances are at the Eisemann Center, a very short walk from Galatyn Park Station.

Hamlet is Shakespeare Dallas’ inaugural indoor performance, at the Moody Performance Hall. It’s more intimate territory for the theater company. So now you can get a close-up view of the Prince of Denmark, who is called upon to exact revenge on his treacherous uncle. He winds up wondering if he should be or not be. The venue is in the Dallas Arts District; it’s closest to Pearl/Arts District Station, which is about a 9-minute walk away and is served by all four lines.