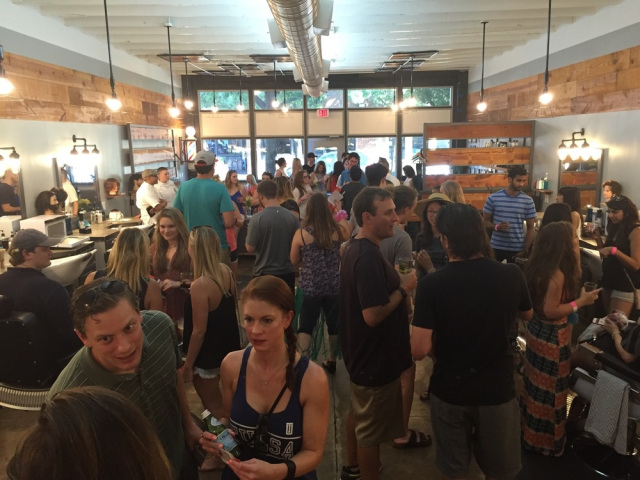 It’s a four-day weekend for some, and family time for most. There are still some cool events to get you out of the house, and you can even do some artsy last-minute shopping. Forget the holiday traffic and take DART to these fun outings.

Deep Ellum Wine Walk happens every third Thursday, and this go-around it’s billed as a “Holiday Soiree.” As usual, the galleries and shops on Main Street will open their doors and top off your specially designed wine glass. Make your first stop Kettle Art Gallery to purchase the glass for $10. If you still have shopping to do, this just might save the day for you. You don’t even have to park, since Baylor University Medical Center Station on the Green Line is only about a quarter of a mile away. The artsy stroll happens from 6-9 p.m.

Slavery at Jefferson's Monticello: Paradox of Liberty is a major exhibition that closes today, so it’s your last chance to catch it at the African American Museum. With more than 300 artifacts from Thomas Jefferson's famous plantation, it brings history to life. The exhibition was popular during its Smithsonian run in 2012, and now it has been updated. The African American Museum was the first venue to host the new content, which includes a feature on Sally Hemings. The museum is in Fair Park, near both MLK, Jr. and Fair Park station.

White Christmas, presented by CORP, gets its last performance today at the State Theater in Downtown Garland. The story follows two successful song-and-dance men, former soldiers in WWII, who are traveling to a Christmas show at a Vermont lodge. They meet a pair of singing sisters and pursue them romantically. Meanwhile, they try to save the bankrupt lodge, which, it turns out, is owned by their former commanding officer. The Plaza Theater is a short walk from Downtown Garland Station.

12 Days of Holiday Beer is a jolly event for beer nerds, with local breweries each joining the Dallas Arboretum for a day from 11 a.m.-2 p.m. in the Val Late Garden. On Saturday, Texas Ale Project will be there; Sunday, you can check out the offerings of On Rotation. You’ll find lots of seasonal displays and holiday activities while you’re there. You can get to the Arboretum by taking Bus Route 60, which departs from Union Station and hits Fair Park Station along the way.

The Dallas Stars hit the ice at 7 p.m. to take on the New York Islanders, who are currently 17 and 12. Get to American Airlines Center the easy way – by taking the Orange or Green line to Victory Station. When it’s time to leave, hopefully the station name will prove appropriate.

DART to Sound The Horn on May 21