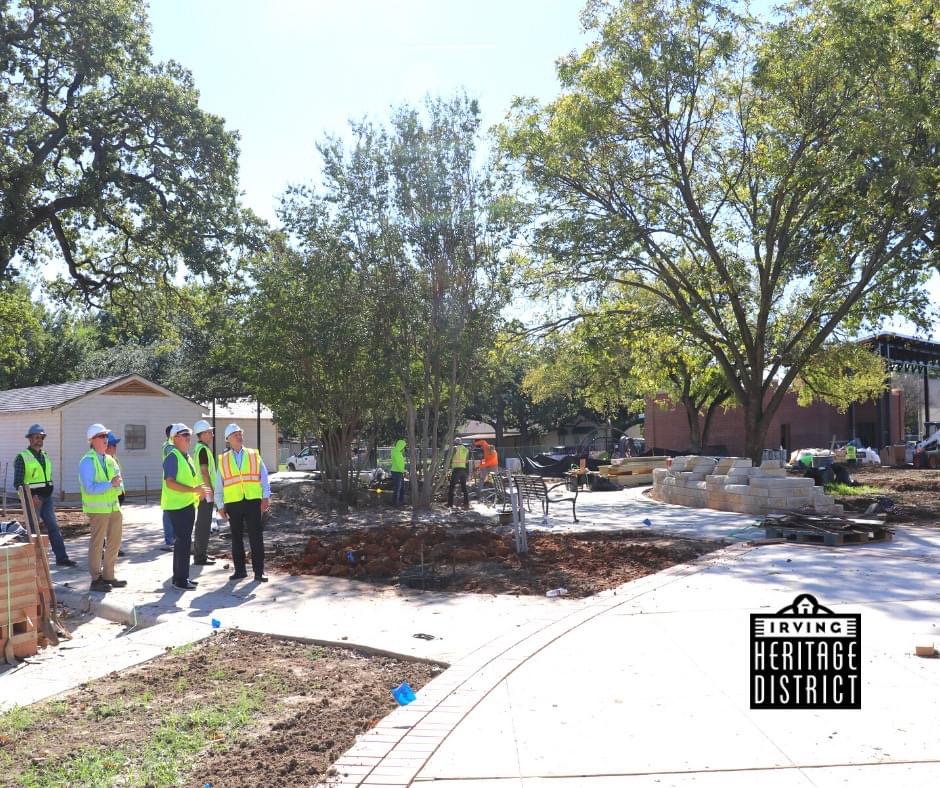 Heritage Park, 217 S. Main St., will set the vibe for the Irving Heritage District. Irving's Parks and Recreation and Capital Improvement Program Departments have redeveloped the space to incorporate new features and technology while maintaining the park’s historic integrity.

Crews hit another project milestone in September with the restoration of the caboose that is on display in the park. A team meticulously reassembled the antique rail car after first stripping it down to the frame. The caboose is now a permanent fixture in the park to honor the significance of the railroad in Irving’s history.

“This place is going to be so much more than a park; it’s going to be a gathering space for families, an entertainment venue for visitors and a must-see destination the entire city should be proud of,” said Irving Mayor Rick Stopfer.

Other structures in the park highlighting Irving’s past are the water tower and the old library building. In August, the century-old water tower was placed atop a newly constructed stone base and now stands at its original height. Renovation work continues on the library building.

Something guests will enjoy is the new Pioneer Walk in the center of the park. A circular path will lead visitors through Irving’s history, told through a series of plaques placed along the walk.

“Heritage Park is going to be the heartbeat of south Irving. The Parks and Recreation Department has some amazing plans to activate the area with large-scale special events and smaller gatherings the whole family can enjoy,” said City Manager Chris Hillman.

As construction on the new entertainment stage and video wall continues, Oncor completed a project to move power lines underground.

Heritage Park is located about three blocks - or a five-minute walk - from DART's Downtown Irving/Heritage Crossing Station on the Trinity Railway Express.

You can expect to tour the renovated park on Dec. 4 during the city’s signature holiday event. Visit IrvingEvents.org for details on the events planned.

Categories : Community DART Daily Inmotion
Leave a comment
Newest on top Oldest on top
Load more comments
Thank you for the comment! Your comment must be approved first