Eight Booker T. Washington High School graduates of the class of 1949 lined up to pose for a picture in front of Dallas’ African American Museum June 3, 2019.

For some, June means the beginning of summer and the end of an era of high school memories. For Texans, June 19 is a celebratory day when news of freedom for all reached their state.

On a Monday morning in June, as some prepared to leave their high school days behind, eight members of Booker T. Washington High School’s class of 1949 reflected on their memories as they celebrated their 70th high school reunion and the progress of African Americans in Dallas. 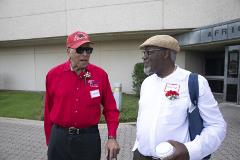 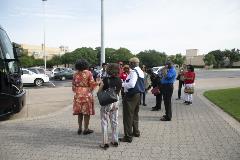 Outside of the African American Museum, near Fair Park Station, the former classmates lined up shoulder-to-shoulder to pose for a picture. The morning heat couldn’t dampen their smiles as cameras clicked, snapped and flashed.  Standing a few feet away were family, friends and later Booker T. Washington High School graduates, like Jackie Taylor who graduated in ’61.

A tour bus stood nearby to take the group to Dallas landmarks that played a significant role in shaping Dallas’ African American community. 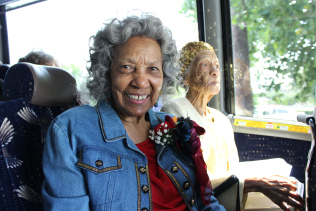 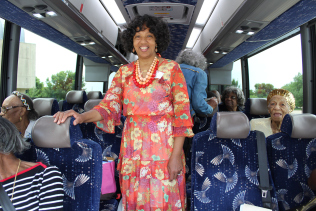 Dora Belle Freeman Mack was one of the classmates of ’49 that morning. She said in her high school days, her peers called her Dora Belle.

Mack became a teacher in Dallas after graduation and has organized every class reunion since, until now. This time, her daughter Valencia Yarbrough, a teacher at The Hockaday School in Dallas, organized the event.

Mack said some of her favorite things about going to Booker T. Washington High School were playing in the school band and making lifelong friendships.

“I’m still in touch with one of my very best friends from high school, who lives in Detroit,” she said.

George Keaton Jr., founder of the nonprofit Remembering Black Dallas, guided the tour. Once everyone took a seat and the bus took off, Keaton brought the passing sights to life with narrations of Dallas’ past.

Separate But Not Equal

Although the Emancipation Proclamation declared slavery void in the former Confederate states in 1863, news of freedom did not reach Texas until two years later on this day 154 years ago, June 19, 1865, when Major General Gordon Granger directed Union soldiers into Galveston.

After the 13th Amendment officially ended slavery in the United States in 1865, equality in society came at a slow pace.

The U.S. Supreme Court’s 1896 ruling in the case Plessy v. Ferguson justified "separate but equal" public facilities and spaces for African Americans and laid the groundwork for legal segregation for the next 58 years.

Despite the inequality of the times, African Americans in Dallas made their own opportunities – conducting business, building communities, and settling largely in what was then known as North Dallas.

From the beginning of the Civil War in 1861 to the 1970s, North Dallas – today’s Uptown -- grew into the largest African American community in Dallas and one of the largest in the U.S. 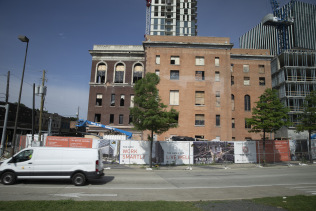 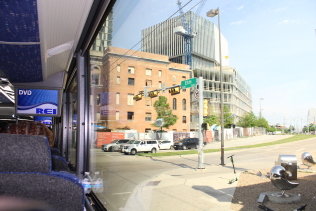 As the tour bus made its first stop, Keaton pointed to one of Dallas’ landmarks, the Pythian Temple. During the early 1900s, the building housed African American businesses as well as hosted dances, performances and community events.

Designed by African American architect William Sydney Pittman and completed in 1916, the Pythian Temple sits on the corner of Elm Street and Good-Latimer, just a short walk from Deep Ellum Station. 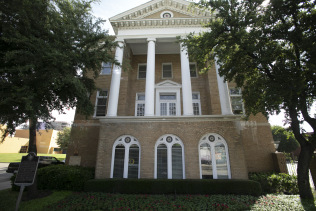 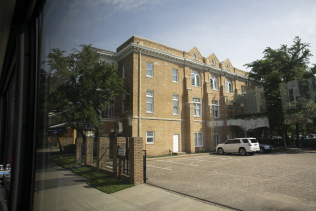 The tour bus proceeded to other landmarks in Deep Ellum such as St. James AME Church. The church, also designed by Pittman, was built from 1919-1921 by entirely African American workers, contractors and electricians.

A Way to Travel

Traveling on a tour bus can make one ponder about how it was to travel in the past.

Through and beyond the 1940s, racial segregation laws governed many aspects of daily life in the U.S. and kept places and amenities like bathrooms, restaurants, schools and public transportation separate and unequal.

When the eight alumni walked the halls of Booker T. Washington High School between 1945 and 1949, the school was one of only two high schools for African Americans in Dallas.

Mack said it was rare that she rode public transit during her high school days. She said she and her classmates lived about 15 minutes from the school and had fun walking most of the time, especially to football games. 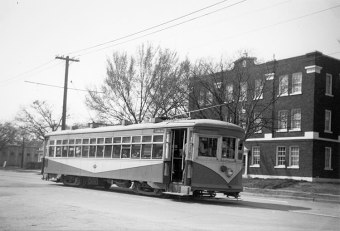 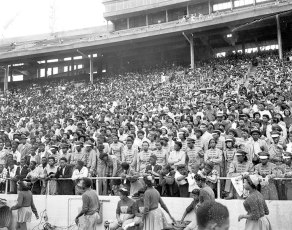 During that time, streetcar use in Dallas was in decline due to the increasing presence of the automobile. In 1945, Dallas’ dominant transit company, the Dallas Railway and Terminal Company, operated 52 less streetcars that year than in 1926, according to Dallas Area Rapid Transit’s 1998 annual report.

Even as the transit industry saw changes from the streetcar to the automobile, the impacts of the 1896 Plessy v. Ferguson ruling continued.

Automobile travel in the era of segregation in the U.S. posed safety risks for African Americans. To help reduce that risk, the publisher Victor H. Green & Company produced “The Negro Motorist Green Book” from 1936 until 1967. The book functioned as a guide to destinations such as hotels, restaurants, barbershops, beauty parlors and service stations where Africans Americans could visit without fear of discrimination. 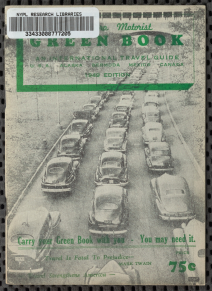 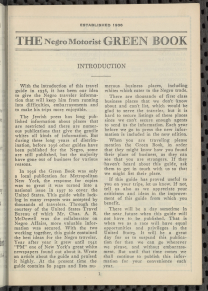 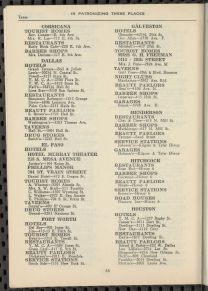 “THERE WILL BE A DAY SOMETIME IN THE NEAR FUTURE WHEN THIS GUIDE WILL NOT HAVE TO BE PUBLISHED. THAT IS WHEN WE AS A RACE WILL HAVE EQUAL OPPORTUNITIES AND PRIVILEGES IN THE UNITED STATES. IT WILL BE A GREAT DAY FOR US TO SUSPEND THIS PUBLICATION FOR THEN WE CAN GO WHEREVER WE PLEASE, AND WITHOUT EMBARRASSMENT. BUT UNTIL THAT TIME COMES WE SHALL CONTINUE TO PUBLISH THIS INFORMATION FOR YOUR CONVENIENCE EACH YEAR.”- THE NEGRO MOTORIST GREEN BOOK: 1949

On the tour, Keaton highlighted the Moorland YMCA building in Dallas as one of the locations that “The Negro Motorist Green Book” featured. You can see the listing above on page 68 from the guide’s 1949 issue.

Construction on the Moorland YMCA building finished in 1930, and the facility offered rooms and beds for visitors and served as a social and civic center for North Dallas’ African American community. Now home to the Dallas Black Dance Theatre, the building sits on Ann Williams Way (once called Flora Street), about a 9 minute walk from Pearl/Arts District Station.

Before making the last stop of the tour, the bus stopped at Booker T. Washington High School for the Performing & Visual Arts, also near Pearl/Arts District Station. Although the school changed since the eight alumni walked its halls, some elements remained the same.

As most of the tour participants deboarded the bus, Yarbrough led them to the school’s oldest building. There, the alumni walked the halls they once walked as high schoolers, viewing photos, newspaper clipping and memorabilia of the school’s former days. 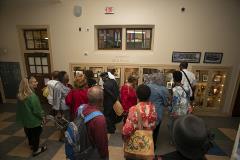 Sylvester Collier, another class of ’49 graduate, peered through the glass cases at these pieces of memorabilia.

Collier came in from Nevada to participate in the tour and said that along with learning woodwork and growing his interest in art while attending the high school, he enjoyed the enthusiasm of his teachers.

Scott Rudes, the current principal of Booker T. Washington High School for the Performing and Visual Arts, met the group in one of the school’s historic hallways.

“We just graduated the next class of alums,” Rudes said to the group. “When the students realize they are standing on the shoulders of giants, it gives them a real sense of pride.”

Booker T. Washington High School began in 1922 and has origins tracing back to the late 1800s. The school  functioned as the only high school in Dallas for African Americans for 17 years and eventually evolved into a technical school in 1955. In 1976, responding to a court order on desegregation, the school transformed into an arts magnet. 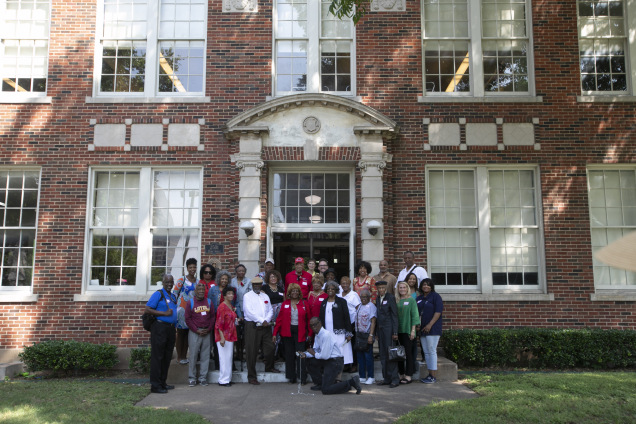 After lingering to chat, reminisce and take group photos at their alma mater, the group boarded the tour bus to visit the final destination of the tour — the Freedman’s Cem​etery.

Established in 1861, near what is now Lemmon Avenue and Central Expressway, the Freedman’s Cemetery, currently near CityPlace/Uptown Station, offered a burial place for some of Dallas’ first African American residents in North Dallas.

Today, the cemetery commemorates that thriving community, some of which was lost during construction of North Central Expressway in 1952. Much of the original cemetery was lost, as well, according to the Dallas Landmark Commission Landmark Nomination Form on Dallas’ Freedman’s Cemetery. 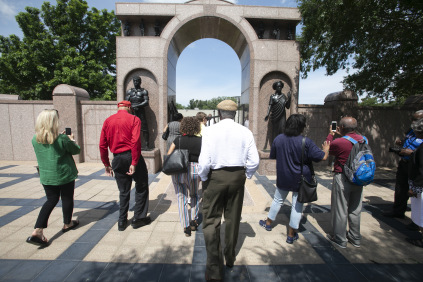 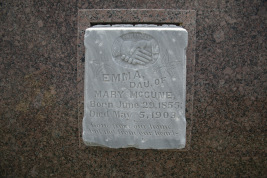 As the tour concluded, the tour bus made its way to Celebration Restaurant on Lovers Lane, where the participants enjoyed a hearty lunch.

DART recognizes that the lessons of the past are the learning opportunities of the present.  As Dallas has grown, so has DART. The agency has become an inclusive mobility manager, bringing the region together and working with North Texas communities to provide connections for future generations.

Now, it's your turn to take the tour and visit some of the landmarks that played a role in shaping Dallas’ African American community. DART is you ride to these places today and throughout the year:

Library of Congress on Juneteenth https://blogs.loc.gov/loc/2015/06/celebrating-juneteenth/

Library of Congress on the 13th Amendment https://guides.loc.gov/13th-amendment

The New York Public Library on The Green Book https://digitalcollections.nypl.org/collections/the-green-book#/?tab=about

From Freedman's Town To Uptown: Community Transformation And Gentrifícation In Dallas, Texas

Source: Urban Anthropology and Studies of Cultural Systems and World Economic Development, Vol. 34, No. 2/3, Communities Old and New in the Dallas-Fort Worth

Published by: The Institute, Inc.

DART: Your Ride to ZestFest